When you book with an account, you will be able to track your payment status, track the confirmation and you can also rate the tour after you finished the tour.
Sign Up
185

Visas are readily obtained at the Airport upon arrival as well as from the Tanzania Embassies and High Commissions abroad prior to departure.

Tanzania money is called Tanzania Shillings, abbreviated as Tshs.  1 US$ is equivalent to about Tshs. 1,300/=. Most banks in Kenya and Tanzania open between 09:00hrs and 15:00hrs. There are however bureau de change in every urban center and the open as earlier as 08:00hrs and close at 17:00hrs. Hotels and lodges change currencies as well.

January is quite hot in East Africa. Summer runs from December to March and rain, if any will be little. The nights could however be cool. You will require warm clothing during the evenings i.e. jackets, long sleeved blouses and shirts, trousers etc. For the day, you may need casual clothing as t-shirts and shorts.

Generally, photography is allowed in Tanzania. (The animals get a monthly wage for posing for the photos, so you are encouraged to take as many shots as you wish). Do not take photos of strangers, police officers, military personnel, presidential motorcade, masai herdsmen and women or any other traditionally dresses persons. You may seek permission first before taking shots of strangers and masai people. Your driver will be at your service for any assistance that you may need.

Arrive at Kilimanjaro International Airport – Arusha on board flight…… at ……hrs, go through the passport control then down to the luggage collection hall. Collect your luggage from the conveyor belt and walk out to the arrival concourse. Someone shall be waiting for you holding a folder written ‘YOUR NAMES’.

Drive from the airport to Serena Mountain Village Hotel and check in. Rest of the day at leisure.

Secreted in the depths of a tree-shaded coffee plantation, wreathed in multi-coloured tresses of tumbling bougainvillea, cooled by mountain streams and strung like a necklace around the shores of an idyllic wooded lake, Mountain Village offers a haven of calm and serenity just outside the hustle and bustle of Arusha, Tanzania’s premier ‘Safari Town’.

Set in the flowered gardens of a coffee planter’s farm house and surrounded by rolling groves of wax-green coffee bushes, Mountain Village offers wide timbered decks with panoramic views over Lake Duluti, and a selection of ethnically-styled ‘Rondavel’ village-cluster rooms, each one neatly thatched with ‘Makuti’ stems, lavishly embellished with ‘Makonde’ carvings and comfortably furnished in traditional safari style.

The stone-built rooms are housed in a half-moon of traditional ‘rondavel’ circular dwellings with views over a bougainvillea-cloaked slope descending to the lake’s shores. Each ‘rondavel’, neatly thatched in ‘Makuti’ stems and lined with close-weave basketwork, has been arranged to cluster in a village-style grouping around the shade of an ancient forest tree whilst the lavishly ‘Makonde’ carved doors radiate off the cool of a central flowered courtyard.

Charmingly appointed with spacious bathrooms, individual verandas and curved French windows giving views onto the tranquil lakeside beauty, the rooms have been decorated in the traditional safari style and feature net-draped beds, soft lamps, intricately carved furniture and pastel-patterned drapes. At the end of an action-packed day, guests can also take in a stroll around the flowered gardens, watch flights of snow-white egret returning to their forest roosts, explore the lake by canoe or follow the nature trail that loops around the lake and into the groves of neighbouring coffee estates.

After breakfast drive to Tarangire National Park to arrive at Tarangire Sopa Lodge for lunch. Do afternoon game drive.

Tarangire comes from Tarangire River which rises in the Kondoa Highlands of Central Tanzania and makes its way northwards through the length of the park. Before becoming a national park, Tarangire was originally a popular hunting area. Today, it is regarded as one of the best wildlife areas remaining in Tanzania. The principal features of the park include the lake, swamps, rivers and rock outcrops. Interestingly, this area is engulfed by several hills. Oldonyo Ngahari is to the east while Kalima is to the south, Sangaiwe and Haidedonga are to the west and Kitibong a bit further inside from the two. On the other hand Tarangire hill is almost centrally located.

The major attractions in Tarangire National Park include the vegetation zones of which the Acacia Tortillis parkland is the most attractive to visitors. The park is also famous for having many species of birds. The other attraction is the tree climbing python, a rare occurrence in other parks.

After breakfast take picnic lunch and depart on a whole day game drive that will take you from Tarangire Nat. Park to Ngorongoro Crater. You will visit Olduvai Gorge en-route.

As if in a land before time, Ngorongoro Serena Lodge is built into the rim of a dormant volcano, the plant and ivy-covered native stone blending masterfully with its surroundings. Close by lies the Olduvai Gorge, the ‘birthplace of man’. Today the volcano and surrounding landscape are part of a vast conservation area inhabited by the masai tribe, as well as an extra-ordinary variety of big game and birdlife. Most guest rooms have private terraces with views of the crater floor where countless animals make their home. At Ngorongoro Serena Lodge, visitors co-exist in perfect harmony with the natural environment and wildlife that inhabits it.

Arrive at Ngorongoro Serena Lodge late in the afternoon.

This day is solely reserved for a full day game viewing of the crater with picnic lunch.

Ngorongoro crater is without doubt one of the most outstanding natural features in the world and was declared a World Heritage Site in 1978. Stunningly beautiful, the 18 km wide and 600 meter deep caldera is teeming with wildlife and one of the best places to see black rhino. On a full day crater tour to this garden of Eden, with a picnic in a shady grove, most large mammals can be seen.

Serengeti Serena Lodge is set high on a hill with breathtaking vistas of a landscape teeming with game. The lodge design is simple but stunning. Inspired by a traditional African village, separate rondavel ‘huts’ house the luxury guest rooms. From the overall impression to the smallest detail, the lodge is rich in local atmosphere created by indigenous handicrafts and art.

Arrive at Serengeti Serena Lodge late in the afternoon.

These days are solely reserved for game viewing in the park.

Serengeti is the most famous of Tanzania’s national parks and is one of the world’s last great wildlife refuges. On the seemingly endless and almost treeless plains, there are an estimated three million large animals in constant search of food and water. Most take part in a seasonal migration that is unparallel in nature. Driven by the rains, over one million wildebeest and a few hundred thousand zebra and gazelles move to fresh grazing lands, in columns of several kilometers length and crossing crocodile infested rivers without regard to losses.

After breakfast drive to Lake Manyara Serena Lodge for lunch.

It is difficult to imagine a more spectacular setting for Lake Manyara Serena Lodge – on the edge of the Mto Wa Mbu (mosquito river) escarpment, overlooking the Great Rift Valley and the stunning Manyara soda lake. Tree-climbing lions are but one lure. The extraordinary birdlife has made this place world renowned among ornithologists, who come to observe the masses of pink flamingoes and great birds of prey. The abundant birdlife inspired the design of Lake Manyara Serena Lodge – swooping curves are complemented by soft, geometric patterns, stylish murals depict bird migration patterns. The circular shape of the buildings is a tribute to indigenous architectural traditions. Beyond the superb standards of hospitality offered, there is a spirit of tranquility that prevails.

Depart for an afternoon game drive.

This slightly alkaline lake at the bottom of the Great Rift Valley can vary in size considerably depending on the season. Part of its western shore, squeezed between the water and the foot of the steep Rift Valley Escarpment is a National Park. Different habitats are concentrated on a small area: open water marshes, grasslands and a lush forest fed by groundwater. Hot springs and hippo pools complete the scenery allowing interesting game viewing.

Drive to Arusha for lunch, then transfer in the afternoon to Kilimanjaro Int. Airport for your international departure flight. 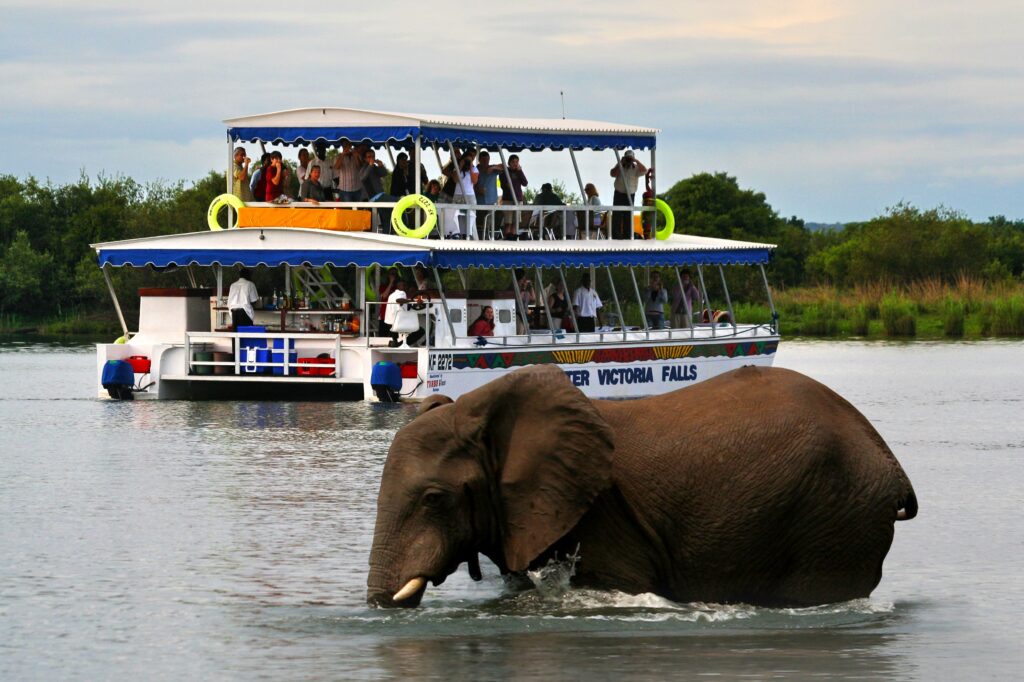 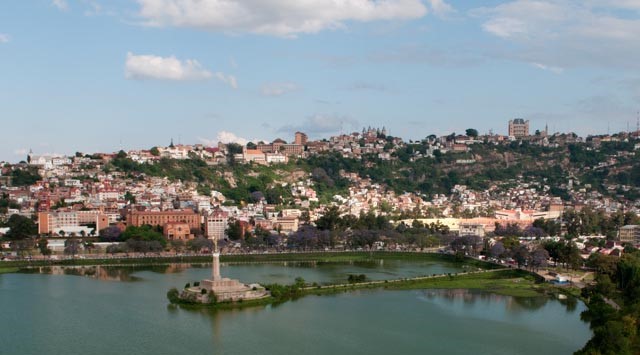