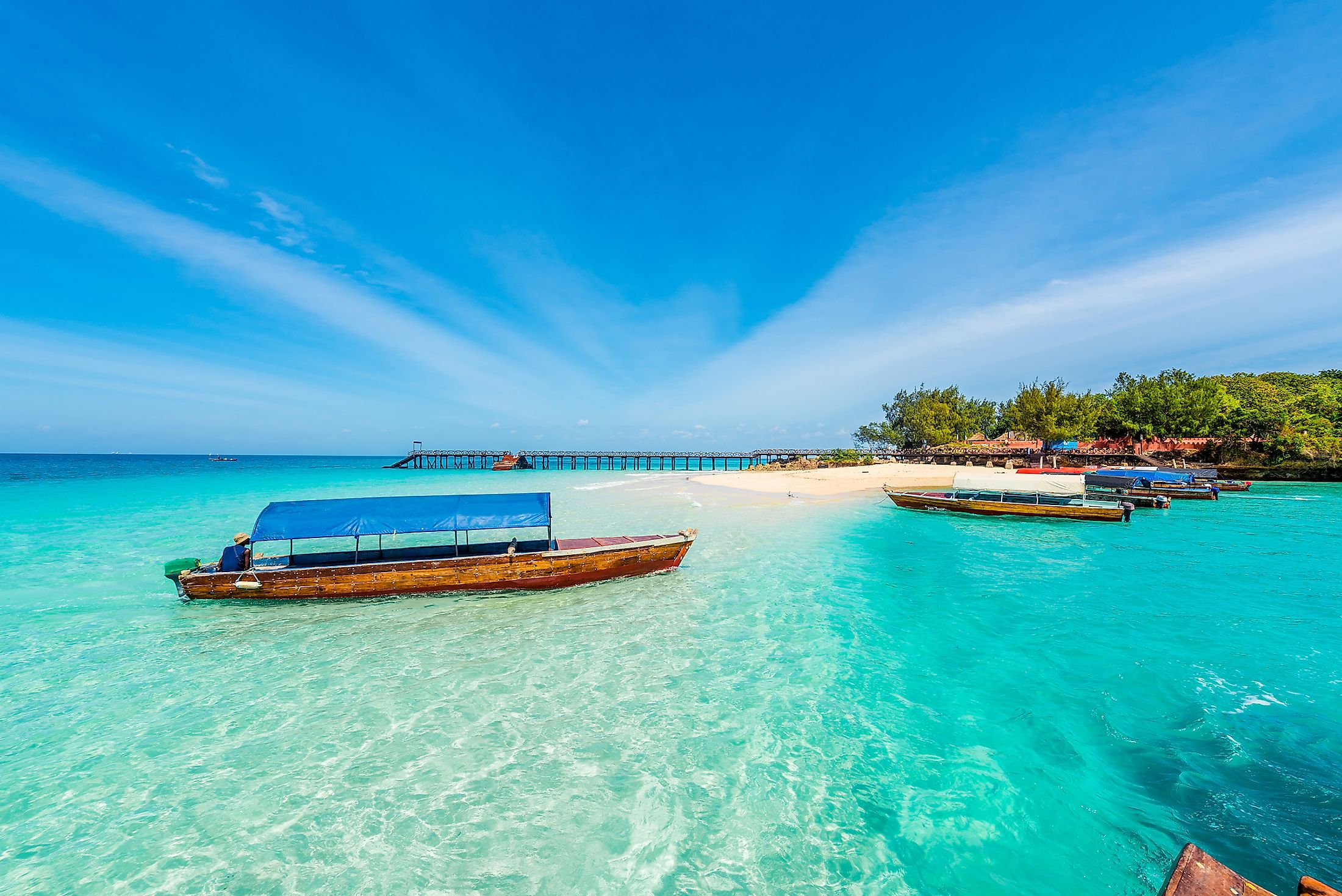 Zanzibar is an archipelago made up of Zanzibar and Pemba Islands, and several islets. It is located in the Indian Ocean, about 25 miles from the Tanzanian coast, and 6° south of the equator. Zanzibar Island (known locally as Unguja, but as Zanzibar internationally) is 60 miles long and 20 miles wide, occupying a total area of approximately 650 square miles.

It is characterised by beautiful sandy beaches with fringing coral reefs, and the magic of historic Stone Town – said to be the only functioning ancient town in East Africa.

Wildlife
There are no large wild animals in Zanzibar, and forest areas such as Jozani are inhabited by monkeys, bush-pigs and small antelopes. Civets – and rumour has it, the elusive Zanzibar leopard! Various species of mongoose can also be found on the island. There is a wide variety of birdlife, and a large number of butterflies in rural areas. The coral reefs that surround the East Coast are rich in marine diversity, and make Zanzibar an ideal location for snorkelling and scuba diving.

People, Religion and Language
Zanzibar’s local people are an incredible mixture of ethnic backgrounds, indicative of her colourful history. Islam is the dominant religion, and practiced by most Zanzibaris, although there are also followers of Christianity and Hinduism. Population is estimated at 800,000, with the largest concentration being Zanzibar City which has approximately 100,000 inhabitants.

Zanzibaris speak Swahili (known locally as Kiswahili), a language which is spoken extensively in East Africa. Many believe that the purest form is spoken in Zanzibar as it is the birth place of the language.

Culture and Festivals
Zanzibar’s most famous event is the Zanzibar Int. Film Festival, also known as the Festival of the Dhow Countries. Every July, this event showcases the best of the Swahili Coast arts scene, including Zanzibar’s favourite music, Taarab.

Government
Zanzibar is an island state within the United Republic of Tanzania, and has its own semi-autonomous government made up of a Revolutionary Council and House of Representatives. The present government is led by the island’s President, Amani Karume. The government body responsible for tourism promotion is the Zanzibar Commission of Tourism.

Economy
Fishing and agriculture are the main economic activities of the local people. Zanzibar was once the world’s largest producer of cloves, and her economy was based on large incomes thus derived. Although cloves are still a major export along with coconut products and spices, tourism has been ear-marked as the primary foreign exchange earner, with more visitors coming to Zanzibar each year.

At this stage, the numbers are still low (less than 100,000 annually) and the potential for tourism is relatively untapped. Zanzibar’s tourism private sector is represented by the Zanzibar Association of Tourism Investors.

Stone Town
It may not have a particularly romantic name, but Stone Town is the old city and cultural heart of Zanzibar, little changed in the last 200 years. It is a place of winding alleys, bustling bazaars, mosques and grand Arab houses whose original owners vied with each other over the extravagance of their dwellings. This one-upmanship is particularly reflected in the brass-studded, carved, wooden doors – there are more than 500 different examples of this handiwork.You can spend many idle hours and days just wandering through the fascinating labyrinth of narrow streets and alleyways.

Most of the houses that can be seen today were built in the 19th century when Zanzibar was one of the most important trading centres in the Indian Ocean region. The coraline rock of Zanzibar was a good building material, but it is also easily eroded. This is evident by the large number of houses that are in a bad state of repair. Several buildings have already been renovated and the Stone Town Conservation Authority has been established to co-ordinate the restoration of the town to its original magnificence.

Pictured opposite is a ‘before and after’ look at the restoration work done on the Old Dispensary. As a result of sensible policy, nearly all of the major hotels built in Stone Town are housed in renovated buildings

As you walk through the town, please remember that Stone Town is very much a real community, where real people live and work. It is not a museum piece or theme park created for tourists, and sensitivity should be shown to the local people.

If you want to learn more about Stone Town, there are various ways to do it. You can either wander through the narrow streets by yourself armed with a map, or you can embark on a tour with one of the local tour operators. But first, take a look at our list of places to visit in Stone Town.

Zanzibar History
Zanzibar has lured traders, adventurers, plunderers and explorers to its shores for centuries…The Assyrians, Sumerians, Egyptians, Phoenicians, Indians, Chinese, Persians, Portuguese, Omani Arabs, Dutch and English have all been here at one time or another. Some, particularly the Shirazi Persians and Omani Arabs, stayed to settle and rule. With this influence, Zanzibar has become predominantly Islamic (97%) – the remaining 3% is made up of Christians, Hindus and Sikhs.

The earliest visitors to Zanzibar were Arab traders who are said to have arrived in the 8th century. The earliest building that remains on Zanzibar is the mosque at Kizimkazi which dates from 1107, and is a present-day tourist attraction.

For centuries the Arabs sailed with the Monsoon winds from Oman to trade primarily in ivory, slaves and spices. The two main islands, Unguja (normally known as Zanzibar Island) and Pemba, provided an ideal base for the Omani Arabs, being relatively small, and therefore fairly easy to defend. From here it was possible for them to control 1,000 miles of the mainland coast from present day Mozambique to Somalia.

Indeed, in 1832, Sultan Seyyid Said, of the Busaid Dynasty that had emerged in Oman, moved his Sultanate from Muscat, which was perhaps more difficult to protect, to Zanzibar where he and his descendants ruled for over 130 years. Most of the wealth lay in the hands of the Arab community, who were the main landowners, kept themselves to themselves, and generally did not intermarry with the Africans.

This was not true of the Shirazi Persians who came from the Middle East to settle on the East African coast. The story goes that in AD 975, Abi Ben Sultan Hasan of Shiraz in Persia (now Iran) had a terrible nightmare in which a rat devoured the foundations of his house. He took this as an omen that his community was to be devastated. Others in the Shiraz Court ridiculed the notion, but Sultan Hasan, his family and some followers obviously took it very seriously because they decided to migrate.

They set out in seven dhows into the Indian Ocean but were caught in a huge storm and separated. Thus, landfalls were made at seven different places along the East African coast, one of which was Zanzibar, and settlements began. Widespread intermarriage between Shirazis and Africans gave rise to a coastal community with distinctive features, and a language derived in part from Arabic, which became known as Swahili.

The name Swahili comes from the Arab word sawahil which means ‘coast’. The Zanzibar descendants of this group were not greatly involved in the lucrative slave, spice and ivory trades. Instead, they immersed themselves mainly in agriculture and fishing. Those Shirazis that did not intermarry retained their identity as a separate group.

Two smaller communities were also established. Indian traders arrived in connection with the spice and ivory trade, and quickly settled as shopkeepers, traders, skilled artisans, and professionals. The British became involved in missionary and trading activities in East Africa, and attempting to suppress the slave trade centred in Zanzibar.