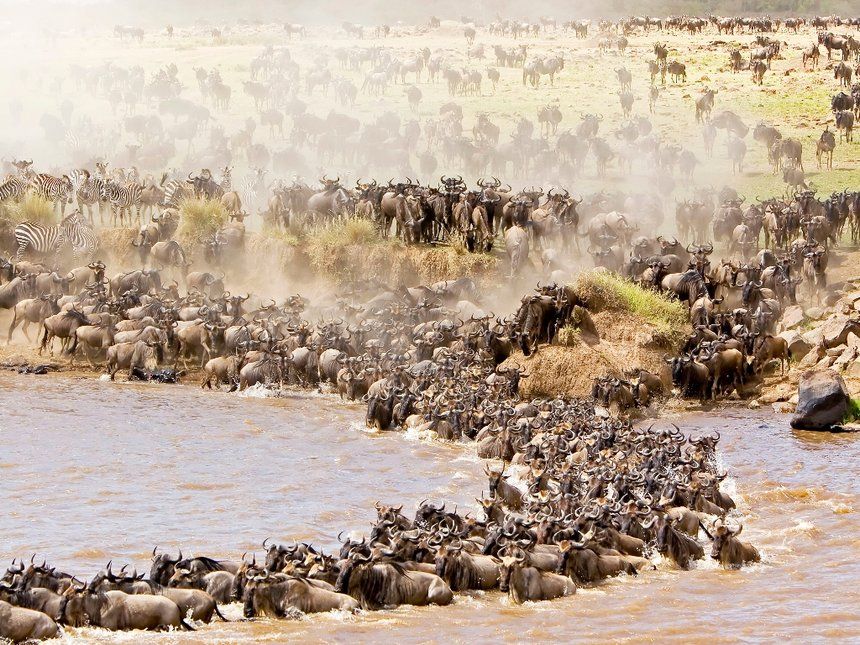 To get the most out of a wildebeest migration safari you need to know where the best places along the migration route are, the times you need to be in certain areas and who the top safari companies are.

The Best Spots On the Migration Route

Have you ever seen those wildlife documentaries that show masses of wildebeest swimming across a river being shadowed and sometimes dragged under by huge crocodiles or drowning because of the crush and fatigue?

And those wildebeest that do make it across safely sometimes fail at the last hurdle because the bank is too steep and slippery with mud for them to reach the top even though they make a huge effort to do so.

This all forms part of the incredible wildebeest migration that takes part every year in the Serengeti and Masai Mara game reserves in East Africa.

The best spots to see spectacles like the ones described above are at the Grumeti river in the western corridor of the Serengeti because this is the first major river the hordes of wildebeest need to cross in their quest for sweeter grazing in the north.

And the massive crocodiles are waiting…

The second and last major river they need to cross before they get to the Masai Mara reserve is the Mara and this is also an excellent vantage point from which to watch the drama play out.

But something that few people know is that there is another part of the wildebeest migration that is just as incredible as the actual trek north. And this is the annual foaling of about 400 000 wildebeest calves all in about a three week period early in the year.

This is also an awesome spectacle and the best spot to experience this is the southern Serengeti in February. You are also bound to see a lot of the predators like lion, hyena, leopard and cheetah take advantage of this food bonanza.

Timing Is Everything With the Wildebeest Migration

So how is it possible for a million wildebeest to just disappear?

This is a question that gets asked reasonably often by people who go to the Serengeti to see the migration but get the timing wrong and then they fail to find the huge herds.

The answer is that the million wildebeest are still there but they are spread out across a wide area on the Serengeti plains so it just seems like there are fewer of them because they aren’t ready to mass for the trip up north yet.

So how can you make sure you get the timing right?

It’s extremely difficult to predict when the migration will occur because it’s all dependant on the rain. And the rain comes at different times each year but it is possible to make a rough estimate based on past occurrences so if you are in the Central Serengeti in April-May you should start to see them move northwest towards the Grumeti controlled area.

In June you will find them doing their death defying swim across the Grumeti river and soon after in August they attempt to ford the Mara river in the north to reach the life sustaining grassland of the Masia Mara in Kenya.

In November-December the migration starts to move southwards towards the Serengeti plains again to capitalise on the fresh grasses that have grown there in the interim.

A very important decision you need to make if you want to experience the wildebeest migration successfully concerns the safari company that you choose to guide you. It’s very easy to become confused because there are so many operators in the market.

Make sure they are a reputable company by getting recommendations from previous travellers that have been on safari with them in Serengeti wildebeest migration trip reports.

And lastly make sure that they can satisfactorily answer all your questions about their payment, refund and cancellation policies and what the exact itenirary will be. Choosing the wrong company for your wildebeest migration safari can be disastrous.

About the Author: Make the right choice of wildebeest migration companies by using the Top Three Serengeti migration operators list which ranks the best companies according to their past performance- http://www.african-safari-journals.com/serengeti-migration.html ..The Top Three Honeymoon Safari Companies List- http://www.african-safari-journals.com/honeymoon-safari.html