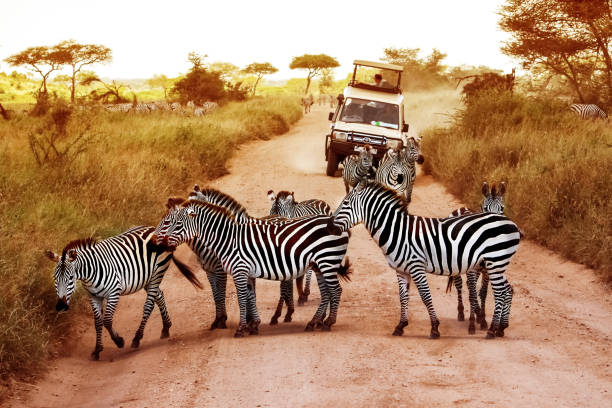 Tanzania is the perfect destination, for a safari, if you wish to visit Africa, that is Africa proper. What makes Tanzania special is this is a land with no tribalism; there is no conflict just an inherent love for peace. People are friendly and welcoming; yes I know every travel book and every travel agency claim that for almost every destination around the world. However, I have lived in many countries in Africa and have traveled to many more countries outside Africa; I can state first hand that the people of Tanzania are the friendliest I have met anywhere.

Tanzania is home to 125 ethnic groups bound together by a common language; Swahili. This was the achievement of the first president of Tanzania Julius Nyerere. The Swahili language bound the country together into a single identity. This has helped to make Tanzania the personification of the peaceful and friendly destination.

Tanzania, since independence has known that the National Parks are a vital part of its future. The government has therefore looked after this lovely country and kept it pristine and unspoiled for the visitors who venture into this corner of East Africa.

Over 28% of the land, over one million square kilometers is set aside as forty-eight National Parks and Game Reserves. There are also numerous Marine Reserves along the coast line that offer some of the best diving in the world. The beaches are white; the coast is exotic and spiced with a rich history.

Lodges and beds are strictly regulated in the game parks. This spares the tourist the disappointment of having several cars surrounding every lion kill; here in Tanzania you truly experience the wildness of Africa. In sub-Sahara Africa Tanzania is without rival. The parks and reserves here contain the largest concentration of animals found anywhere in the world. Including the wildebeest migration the world’s last remaining great migration.

Humans – especially tourists flock together. This display manifests in the game parks; most people wanting to be in the Serengeti and almost everyone concentrating in one area – the Central Serengeti. The Serengeti is huge yet most tourists are concentrated into one area on this vast park. Plan your safari carefully; look for an operator who is interested in more than making a quick profit out of a dull safari itinerary.

There are other National Parks here with high concentrations of animals that boast just one lodge. Imagine that; a whole slice of Africa all to yourself. I doubt you could find that in Kenya, well maybe in the north of the country but Kenya has troublesome neighbors and northern Kenya although wonderfully wild is also notoriously unsafe.

The place to have the true out of Africa experience is Tanzania. It has the parks, it has the animals in huge numbers and it has the peace and security that no other African Country can offer. If you want a safari, a proper safari than Tanzania is the only real option.

For further information on traveling to Tanzania safari, Kilimanjaro and the Spice Islands of Zanzibar go to – http://www.betheladventure.co.uk using tourism to change lives.