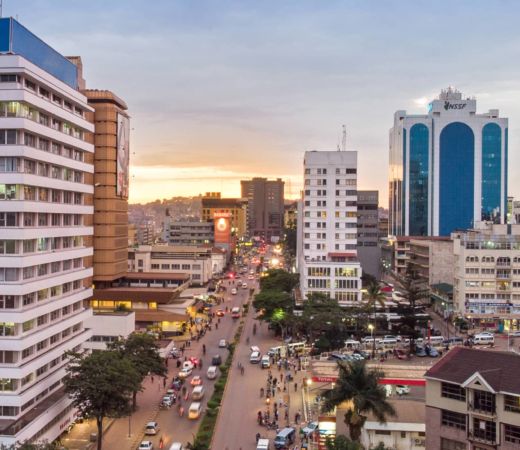 Uganda is saturated in colour, the outstanding natural beauty of its people and its landscapes have always stirred inspiration in travellers and residents.

Parts of Uganda have changed very little in the last hundred years; the period of turmoil between 1967 and 1986 virtually ground all industrial and economic progress to a halt.

Uganda has only just started to receive positive international attention and it has been slow and cautious in coming. The increasing confidence with which donor countries treat Uganda is a direct result of its current leadership, which has been so responsive in progressive policy making.

There has been much to learn, for both the donors and the public and private communities in Uganda, from the results around the rest of the continent. Lessons have been learnt. The result has been fast and real progress has been made. In some cases, Uganda has started to set trends for other countries to follow, financial policies have got to grips with wildfire inflation and currency fluctuations.

The government is allowing free expression and, through this, is unifying the Ugandan peoples.Matters of constitution and restitution are a priority, which is creating a very positive forum for peace and stability.

Agriculture, the traditional backbone of Uganda’s economy (employs about 80% of the active population), contributes to debt service. The massive sugar and textile industries of the 1960s are reviving, along with the large tea estates long neglected.
The government controls on the coffee and cotton industry have been loosened to allow the farmer a larger market in which to sell his produce, and private exporters have been granted licences.

Horticulture and floriculture are receiving increased investment as air-cargo becomes a viable means of’ transport. The government has facilitated foreign investment with attractive incentives and streamlined import and export procedures. Many expelled Asians have returned to reclaim their properties and are reinvesting in a growing economy.

Tourism, the most sensitive of all industries to develop, is finally attracting investment and interest. Significant progress has been made in the redevelopment of infrastructure in the National Parks.

The devastation of the animal populations that took place during the war years is beginning to be repaired through increased control and management.

New areas of interest such as mountain gorillas and ecotourism, white water rafting and sport fishing have put Uganda back on the East African tourist circuit. The Nile, a source of wonder and inspiration for thousands of years, cuts a verdant and often turbulent median south to north through the country.

The Nile flows from Lake Victoria at what was Rippon Falls and into Lake Kyoga. Still the Victoria Nile, it cuts a raucous passage west across Karuma Falls and through the narrow pillars of Murchison Falls towards Lake Albert. Finally the Albert Nile meanders along a slow, wide corridor into Southern Sudan.

To the far west of Uganda, on the Zaire border, the snow covered Rwenzori Mountains (or Mountains of the Moon as Ptolemy called them) rise into almost permanent equatorial mists. The mountain slopes have their own strange successive worlds of vegetation, each with its own characteristic flora.

In the extreme south-west are the Mufumbiro volcanoes, a chain of imposing cones that rise out of the lava plain f the western rift. The tropical hardwood rainforests of Western Uganda such as Maramagambo, Budongo and Bwindi evoke adventure and wonder.

Kampala, the modern capital, is the centre of most economic activity. It is steadily being rebuilt after systematic looting and destruction during the changes of government. The city infrastructure has been restored and new office towers, hotels, stadiums and shopping malls are appearing almost monthly. Entebbe, the former administrative capital, is still very picturesque, though rundown and neglected.

The century old botanical gardens are being restored to their former splendour.
The presence of the international airport at Entebbe will ensure its continued restoration. Of the other towns around the country, Jinja, at the source of the Nile, Mbarara, on the road west, Fort Portal, at the foot of the Rwenzoris, and Mbale on the eastern border are all howling promising signs of economic recovery.

The apparent slow development and poverty of areas outside Kampala is combined result of cautious investment and the relatively recent restoration of countrywide infrastructure. Tourism and increased commercial agriculture will gradually redress the balance, as they have elsewhere in Africa.

Uganda is rich with culture and artistic talent, Ugandans are lively actors and public speakers. Hardly a night passes without the rhythmic sounds of traditional dancing or, in Kampala, modern disco music. The overriding impression of Uganda is of its happy people. Hardship and war are not forgotten, but they are in the past, to be recalled in silent prayers and thoughts for absent friends.