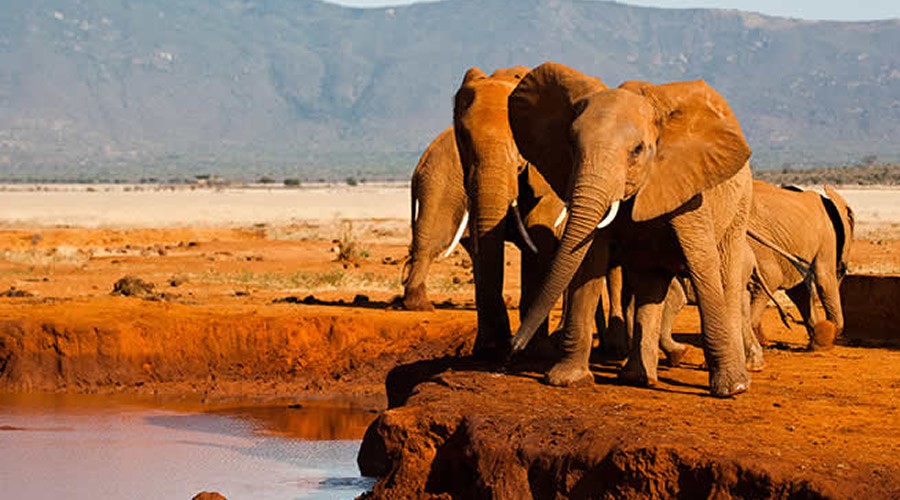 The Tsavo East National Park covers an area of about 12,000 km2, 40% of Kenya’s parks’ total area. This vast park lies in low semi arid country at the eastern edge of the inland plateau, north of the main Mombasa-Nairobi road and railway. Much of the park is level, open country with scattered rocky ridges and outcrops. Due to its size, the park is one of the world’s wildlife and biodiversity strongholds.

The Yatta plateau, a long, flat topped lava ridge, runs along the western boundary of the park. Beneath it flows the Athi river which joins the Tsavo river, just above the Lugard falls, to become the Galana river, a permanent river that cuts right across the park. The seasonal Tiva and Voi rivers are important features of the Northern and Southern sectors respectively. There are scattered seasonal pools, swamps and dams, but relatively few sources of permanent water.

One of the great spectacles of the park is the Mudanda rock between Voi and Manyani. This 1 1/2 km long outcrop is a water catchment area which supplies a natural dam at its base. In the dry season, hundreds of elephants come to drink and bathe here.

MAJOR ATTRACTIONS
Large herds of elephants and other wildlife. Popular legend of Tsavo “The man-eaters of Tsavo”. Yatta plateau – it is about 290 Km long and is one of the worlds longest lava flows. Lugards Falls on the Galana river – This is not a true falls but a series of rapids. Visitors can walk down to the river to view the rapids. Mudanda rock – This is a long rock outcrop that is about 1.6Km long. There is a dam at the base. Animals can be seen drinking.

Visitors can walk along the rock and enjoy a cool breeze as well as view wildlife at the base. Aruba Dam – was built in 1952 across the Voi river. The dam attracts many animals and water birds can be seen at this dam. Tsavo/Athi rivers confluence – when the two rivers join they form the Galana river.