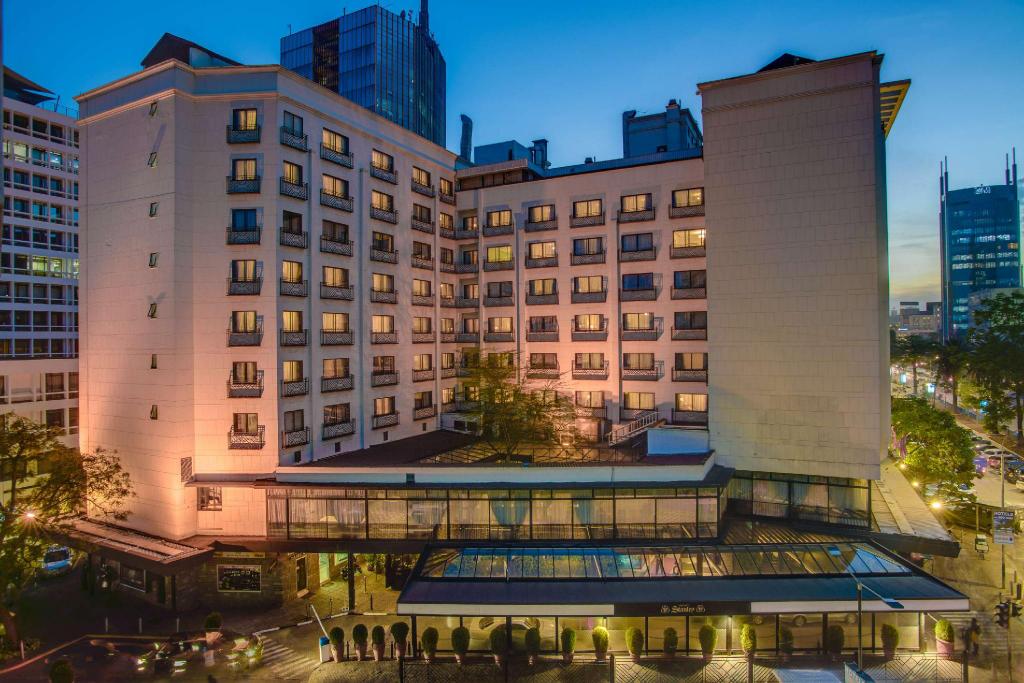 The Stanley, established in 1902 is a slice of Victorian elegance right in the heart of modern Nairobi’s heat and bustle. It has 217 rooms and is the home to:
Wireless Internet Connection.
The Thorn Tree Restaurant East Africa’s best meeting place
The Zen – the art of fine dining.
The Exchange Bar – former home for the Nairobi Stock Exchange for 37 years
Pool Deck – al fresco restaurant on the 5th floor offering wholesome buffets
The most luxurious state suites in Kenya
An ultra-modern health and fitness club
State-of-the-art Motivator Conferencing facilities
Only free valet parking service in Nairobi
8 fully equipped function rooms

The Stanley has had 3 owners and been renovated 3 times since its inception way back when Nairobi was little more than a Railway outpost sporting a few wood and tin buildings.

OWNERS
Mayence Bent was the original owner of what was then known as Stanley Hotel, which she started on Victoria Street (later Tom Mboya street) in1902. In 1905, she moved the hotel to larger premises on Government road (later Moi Avenue). In 1909,

Mayence and her new husband, Fred Tate whom she married a few years after her separation from her first husband, bought two corner sites located on Sixth Avenue and by 1913, the Tate’s New Stanley opened on the hotel’s present location.

The Block Family bought the hotel from Mayence Tate in 1947 although she still maintained financial interest. Her husband Fred had passed away in 1937, and much of Mayence’s will to continue involving herself with the hotel’s affairs and management was diminished with his death.

The Sarova Group bought it from Abraham Block and family in 1978.

RENOVATIONS
A major reconstruction and overall beautifying of the hotel took place in 1932 under the watchful eye of Fred and Mayence Tate.

In 1958 most of the hotel structure was demolished and rebuilt in line with Jack and ‘Tubby’- Abraham Block’s two sons – plans for massive improvements for the hotel.

After operating the hotel under the name The New Stanley for about 20 years, The Sarova Group undertook a massive rehabilitation worth about US$ 20 million in 1998/99. The management had resolved that the hotel would revert to its original name, The Stanley, and so it stands today.
The Thorn Tree

Guarding The Stanley’s entrance is the world’s famous messenger- an, whose message-board has formed the centrepiece of the legendary Thorn Tree Café since 1959.
Although the café is now on its third acacia and the messages now flowing from the trees own web-site, the atmosphere of Africa’s best known meeting place is still as warm and welcoming as it was in those early days.

Thorn Tree is an open-air café, famous meeting point of East Africa since the time of the Safari aficionado Ernest Hemmingway. It was the thorn tree itself, of the Acacia Xanphopholoea variety, that gave the café its present name. Like a trusted messenger, the tree became the bearer of messages that were stuck on its yellowish trunk to be plucked off by travelers visiting the hotel.
The original tree was felled in 1961 and a replacement was planted. By 1997, the tree showed the symptoms of maturity when its’ branches started drooping and natural lean became more exaggerated. A farwell party was held to bid the old tree farwell and to welcome its replacement, a young acacia of the same variety. Buried beneath the four meter high tree is a time capsule bearing an inscription specifying that it will be opened in the year 2038 when the tree will have reached maturity. The capsule contains a selection of artifacts depicting the present state of the world. It now meets with this centuries requirements and has a cyber café and is open from 9.00am-11.00pm