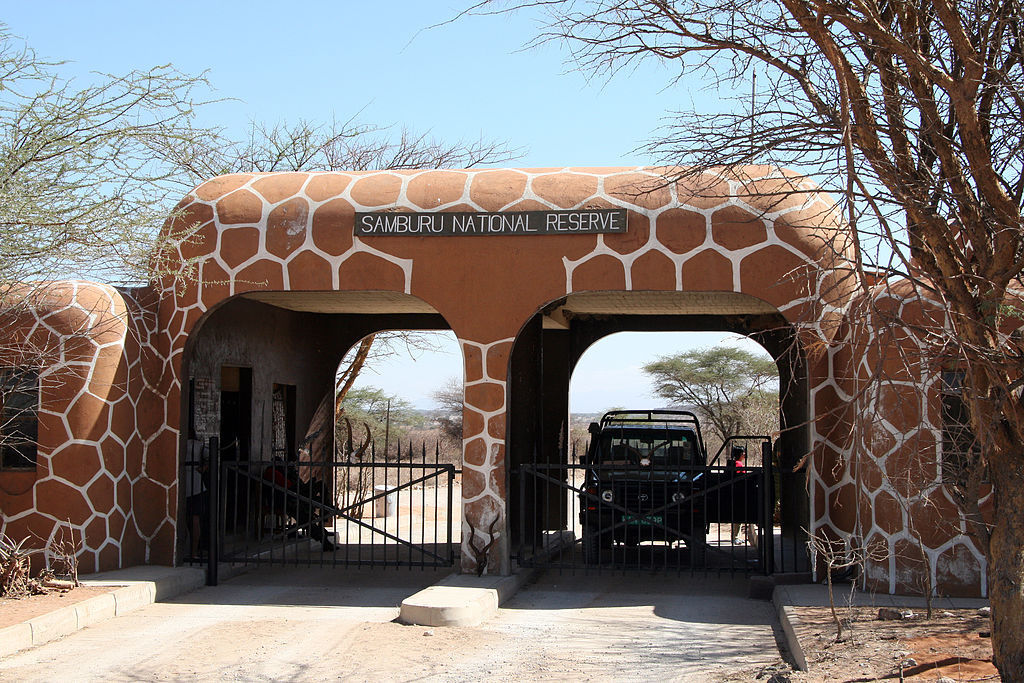 Samburu National Reserve is situated in the hot and arid fringes of Kenya’s vast Northern Frontier District. The area is home to the Samburu tribe, pastoral relatives of the Masai. The landscape is rugged and dramatic – against a backdrop of volcanic mountains, gaunt hills and withered scrub trees punctuate the sparse and dry terrain with clusters of the incredibly hardy desert rose to provide the occasional flash of vivid color.

The Samburu region is the best place to find several endemic Northern species, including Gerenuk, the Reticulated Giraffe, and Grevy’s Zebra.

The forests along the river banks are home to many birds, including local species such as the Palm Nut Vulture and the Vinaceous Dove. These forests are also home to many Leopards, often seen at dusk. The sight of one of these beautiful and elusive creatures is always a rare treat.

Lions are also frequently seen on the riverbanks, and Cheetah can be found on the open plains. On rare occasions, packs of African Hunting Dogs are sighted passing through the reserve.

When you see a camel train walking single file along a dry riverbed, you realize you are in a pretty parched area. The three National Reserves of Samburu, Buffalo Springs, and Shaba are at the beginning of the dry north where camels become commonplace. However, it is not a completely parched area as it is watered by the Uaso Nyiro River or ‘River of Brown Water’ in Samburu.

This is an essential and sometimes erratic water source for all the inhabitants, including a considerable amount of wildlife in the reserves and Samburu cattle and goats. Out of the north Kenyan tribes of Samburu, Rendille, Turkana and Borana, the Samburu dominate this area.

To the uninformed eye, they could be confused with the Maasai – for they are closely related and wear similar bright clothing and jewelry and have the same cultural beliefs. They continue their nomadic pastoralist lifestyle as they have done for hundreds of years. The scrub desert, desiccated savannah, and small hills of this region create overriding colors of muted greens, dusty creams, sand yellow, earthen ochre, and every shade of brown. Perfect camouflage colors for the many animals that inhabit these parks.

BIRDS AND AMINALS AT THE SAMBURU NATIONAL RESERVE.
The reserves are relatively small and animals are easy to find, with a number of weird and wonderful species endemic to this area. Notably the gerenuk – also known as the ‘giraffe-necked antelope’ because of its ridiculously stretched neck adapted for browsing high into the bushes. Another local inhabitant is the Grevy’s zebra, which resembles an ass with wide stripes that don’t quite go all the way under the belly. Reticulated giraffes are different from their southern cousins in their perfectly arranged pattern. A very common dwarf antelope in these parts is the tiny dik-dik, which is devoted to its mate for its entire lifetime.

Many other species exist in these reserves and large crocs and hippos inhabit the river. Leopard, lion, cheetah, and hyena are found here and an unusual treat is that leopards are commonly seen in daylight. Birds are numerous and 365 species have been recorded in Buffalo Springs reserve.

THE SPECIALTIES OF SAMBURU NATIONAL RESERVE