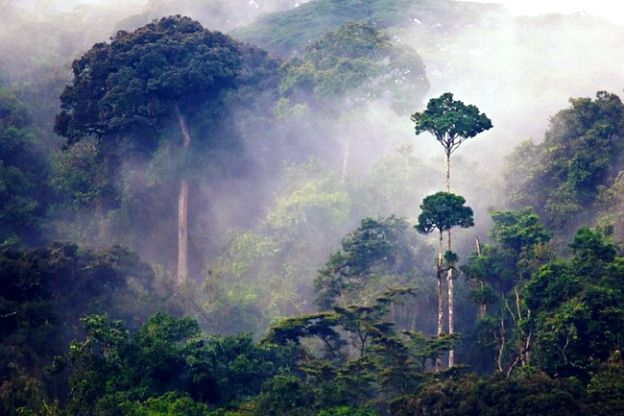 Extending for 1,000 square kilometres across the majestic hills of southeast Rwanda, Nyungwe National Park is the largest block of montane forest in East or Central Africa, and one of the most ancient, dating back to before the last Ice Age. A uniquely rich centre of floral diversity, the forest has more than 200 different types of tree, and a myriad of flowering plants including the other-worldly giant lobelia and a host of colourful orchids.
Nyungwe is most alluring for its primates: 13 species in all, including humankind’s closest living relative the chimpanzee, as well as the handsome L’Hoest’s monkey and hundred-strong troops of the delightfully acrobatic Angola colobus. The most important ornithological site in Rwanda, Nyungwe harbours almost 300 bird species of which two dozen are restricted to a handful of montane forests on the Albertine Rift. The avian highlight of Nyungwe is the great blue turaco – an outlandish blue, red and green bird which streams from tree to tree like a procession of streamlined psychedelic turkeys.

An extensive network of well-maintained walking trails leads through the forest to various waterfalls and viewing points. A comfortably rustic resthouse and perfectly situated campsite lie alongside the main road, and the reserve can readily be visited as a day trip from the towns of Butare and Cyangugu. Nyungwe does, however, deserve more time: anybody who wants to track chimps and see several varieties of smaller primate will need two days there – and dedicated birdwatchers might never want to leave!