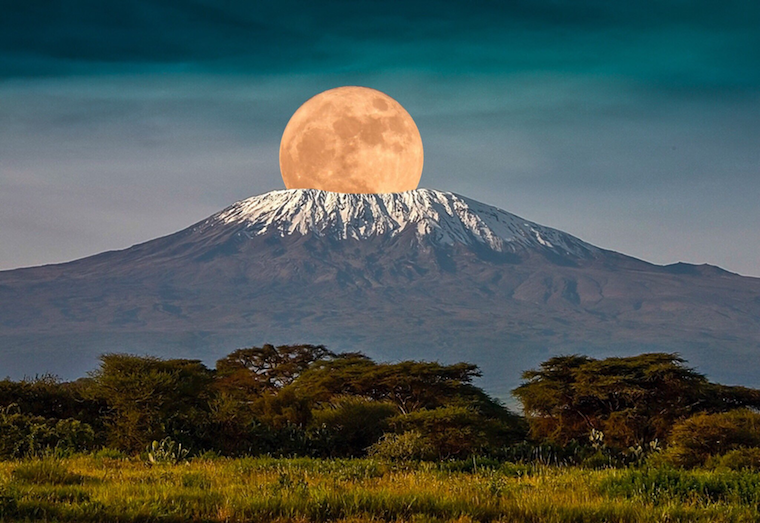 Mount Kilimanjaro is the Everest of Africa, with its summit close to the altitude of Mt. Everest’s base camp. Yet Kilimanjaro does not stand out as the highest peak in a snow-capped mountain range. It rises in complete isolation in a land of flat plains grazed by elephants, zebras and other African animals.

Kili – as the mountain is often referred to – rises to 19,336 feet (5,895 metres) in a land where no mountain seems fitting. If you arrive when this dormant volcano is obscured by cloud, you could miss it altogether, as there are no rugged foothills or plunging valleys to suggest its presence.

Conquering this mountain is the dream of many visitors to Tanzania and about 20,000 hikers climb it every year. Mountaineering skills are not a pre-requisite but a reasonable level of fitness and a lot of determination is. Altitude sickness can set in above 9,900 ft (3,000m) and is often the reason for failing to make it to the top.

In 1889 it took Hans Meyer six weeks to reach the summit. These days the treks last five or six days and porters are available to carry your load. The local Chagga guides and porters often climb the mountain once a week, while the visitor unused to such exertion, finds this once-in-a-lifetime trek a literally breathtaking, exhilarating challenge.

The ascent takes you on a climatic journey from the tropics to the arctic. The grassy cultivated lower slopes soon turn into lush rainforest inhabited by elusive leopard, elephants, antelopes and buffalo. Above this is heath and moorland dotted with particularly impressive giant groundsel up to 16 feet (5 metres) high, along with huge lobelias and massive heathers.

Iridescent blue-green sunbirds and drab brown but shrill-voiced alpine chats inhabit this strange world of giants. As the air grows dry and cold the terrain changes to Alpine desert, then finally ice, snow and cold rarefied air slow the pace to a dawdle. The crater rim at sunrise is the final achievement in this great African challenge.

Seasons
Mt Kilimanjaro can be climbed throughout the year, but the rainy season makes the forest more slippery and the summit may be blocked by snow. Be prepared for bursts of rain on the mountain at any time of the year. Just after the end of the rains is scenically the most attractive time to go. Be prepared for climatic extremes, from rain in the forest, intense sun in the alpine desert and freezing temperatures at the summit.

Dry Season: It is best to climb the mountain in the dry months from late June to early October (which are cool and dry) or late December to early March (which are hot and dry).
Rainy Season: Rain usually falls from April to June and in November and early December. Heavy snowfalls may be experienced.
Temperatures: the lower slopes are warm and pleasant at around 59-68°F (15-20°C). Above 13,200 feet (4,000 metres) temperatures drop to lower than 41°F (5°C) and plunge to well below freezing in the icy winds on the summit.

Facts
The National Park covers an area of approximately 470 miles² (755 km²). It attained park status in 1973. The mountain is about 80 miles (120km) from Arusha. There are six usual trekking routes to the summit. Equipment and porters can be hired. Nearly half of those who attempt Kili don’t make it to the top.The mountain is a not a malarial area, but the surrounding lowlands of Tanzania are.