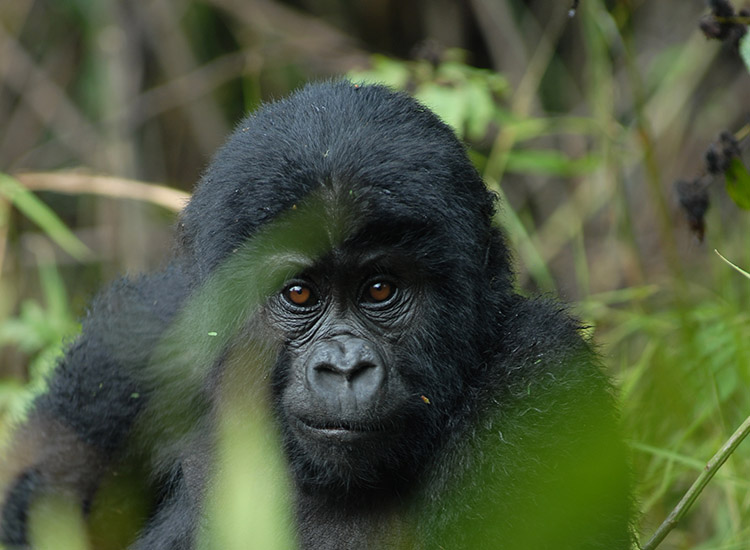 The Mgahinga Gorilla National Park, gazetted in 1991, covers an area of 33.7km2. It is found in the extreme Southwestern corner of Uganda that borders with the Democratic Republic of Congo and Rwanda. It includes parts of Muhavura, Mgahinga and Sabino Volcanic Mountains. The summit of Muhavura has a small crater lake and forms the highest point (4127m) in the Park. The summit areas are dominated by wort and dwarf heath vegetation.

This emerges into bamboo and broad leaved montane forest, down the mountains. The lower slopes have high altitude savannah woodland with lots of lichens and mosses. The Mountain Gorillas (Gorilla gorilla brengei) are the most awe-inspiring animals to be found in Africa. Unfortunately, man has not been merciful to them. Poachers have decimated them, and man has destroyed their natural habitat. They have faced extinction, but today sound conservation policies have slowed down their decline, and in the Mgahinga Gorilla National Park they are able to establish their family groups untroubled by predatory man. Here on the slopes of the Virunga Mountains, in south west Uganda, the Mgahinga Gorilla National Park (33.7 sq.km) has been established to provide a secure habitat for these massive, but gentle creatures.

Access to the families is strictly controlled (and not always permitted) and small groups of visitors are always accompanied by a trained ranger. To keep disturbance to the animals to a minimum there are limits to the number of tourists allowed in at any one time. Here we are in the home of the animals and we must act as the perfect guests.

The Mgahinga Gorilla National Park wildlife include Colobus Monkey, Jackal, Porcupine, Golden Cat, Gorilla, HoneyBadger, Duiker, Aardvark, Elephant. This Park is the second home of the rare Mountain Gorilla (Gorilla gorilla beringei) in Uganda. Other animals in the area include golden monkey, leopard, giant forest hog, bushbuck and buffalo. There is a wealth of birdlife.