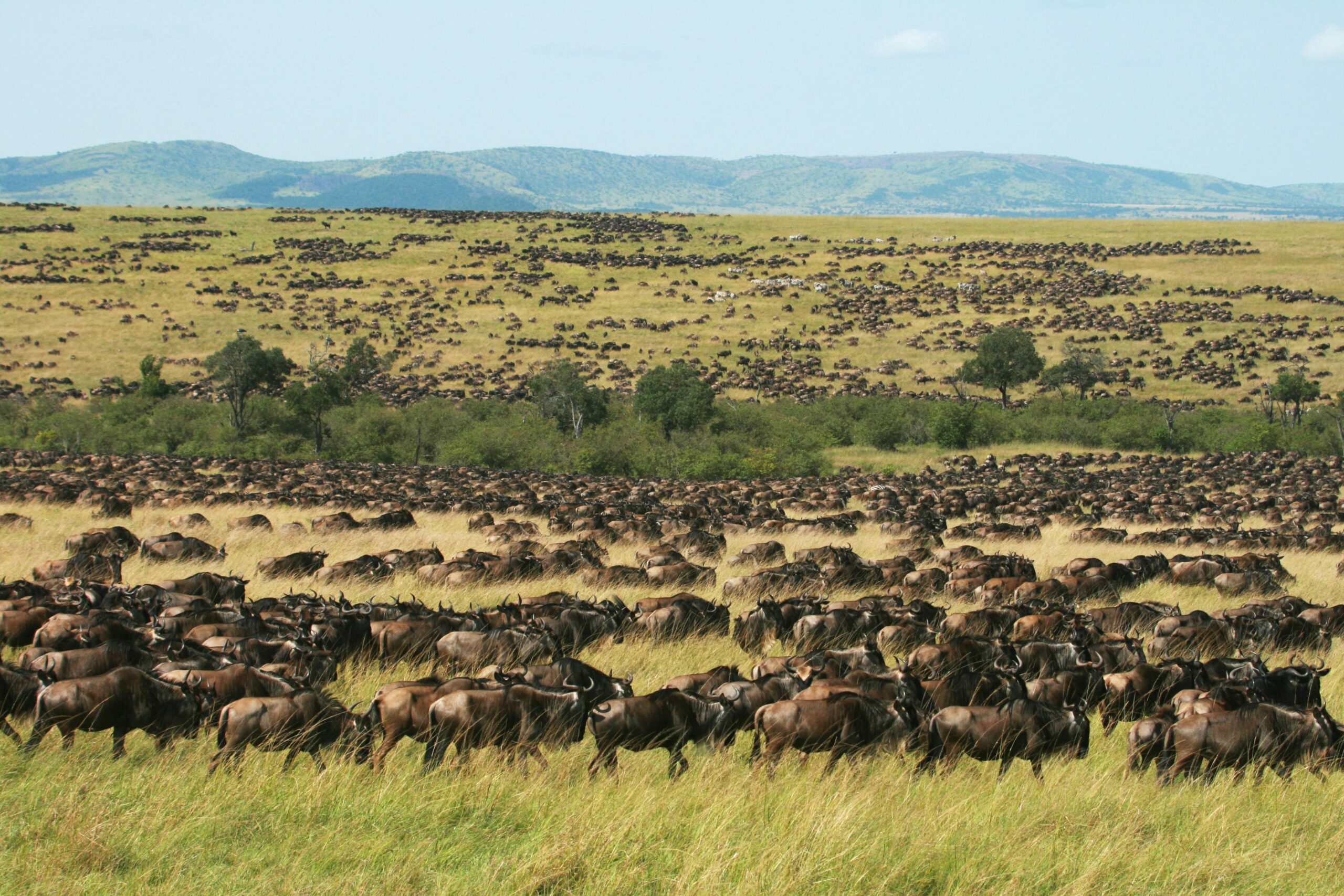 The Masai Mara National Reserve is one of the best known and most popular reserves in the whole of Africa. At times and in certain places it can get a little overrun with tourist minibuses, but there is something so special about it that it tempts you back time and again.

Maasai Mara Game Reserve is considered to be Africa’s greatest wildlife reserve. The Mara comprises 200 sq miles of open plains, woodlands and riverine forest. Contiguous with the plains of the Serengeti, the Mara is home to a breathtaking array of life. The vast grassland plains are scattered with herds of Zebra, Giraffe, Gazelle, and Topi. The Acacia forests abound with Birdlife and Monkeys. Elephants and Buffalo wallow in the wide Musiara Swamp. The Mara and Talek rivers are brimming with Hippos and Crocodiles.

Each year the Mara plays host to the world’s greatest natural spectacle, the Great Wildebeest Migration from the Serengeti. From July to October, the promise of rain and fresh life giving grass in the north brings more than 1.3 million Wildebeest together into a single massive herd. They pour across the border into the Mara, making a spectacular entrance in a surging column of life that stretches from horizon to horizon.

At the Mara River they mass together on the banks before finally plunging forward through the raging waters, creating a frenzy as they fight against swift currents and waiting crocodiles.

The wildebeest bring new life to the Mara, not just through their cycle of regeneration of the grasslands, but for the predators who follow the herds

Seasoned safari travellers, travel writers, documentary makers and researchers often admit that the Masai Mara is one of their favourite places. So why is that? Perhaps it is because of the ‘big skies’, the open savannahs, the romance of films like ‘Out of Africa’ and certainly because of the annual wildebeest migration, the density of game, the variety of birdlife and the chance of a hot air balloon ride. Also because of the tall red-robed Masai people whose lifestyle is completely at odds with western practices, and from whom one learns to question certain western values.

A combination of all these things plus something to do with the spirit of the place – which is hard to put into words – is what attracts people to the Mara over and over.
The Masai Mara lies in the Great Rift Valley, which is a fault line some 3,500 miles (5,600km) long, from Ethiopia’s Red Sea through Kenya, Tanzania, Malawi and into Mozambique. Here the valley is wide and a towering escarpment can be seen in the hazy distance. Most of the game viewing activities occur on the valley floor, but some lodges conduct walking tours outside the park boundaries in the hills of the Oloololo Escarpment. The animals are also at liberty to move outside the park into huge areas known as ‘dispersal areas’.

There can be as much wildlife roaming outside the park as inside. Many Masai villages are located in the ‘dispersal areas’ and they have, over centuries, developed a synergetic relationship with the wildlife.

There are four main types of topography in the Mara: Ngama Hills to the east with sandy soil and leafy bushes liked by black rhino; Oloololo Escarpment forming the western boundary and rising to a magnificent plateau; Mara Triangle bordering the Mara River with lush grassland and acacia woodlands supporting masses of game especially migrating wildebeest; Central Plains forming the largest part of the reserve, with scattered bushes and boulders on rolling grasslands favoured by the plains game.

THE WILDLIFE AND BIRDLIFE
In a short stay during the wildebeest migration you could see thousands of animals, at other times there are still hundreds. The plains are full of wildebeest, zebra, impala, topi, giraffe, Thomson’s gazelle. Also regularly seen are leopards, lions, hyenas, cheetah, jackal and bat-eared foxes. Black rhino are a little shy and hard to spot but are often seen at a distance.

Hippos are abundant in the Mara River as are very large Nile crocodiles, who lay in wait for a meal as the wildebeest cross on their annual quest to find new pastures.
Every July (or sometimes August), the wildebeest travel over 600 miles (960km) from Tanzania’s Serengeti plains, northwards to the Masai Mara and the Mara River is the final obstacle. In October or November, once they have feasted and the grass has all but gone, they turn around and go back the other way.The Mara birds come in every size and colour including common but beautiful ones like the lilac breasted roller and plenty of large species like eagles, vultures and storks. There are 53 different birds of prey.

CLIMATE AND SEASONS.
Rainy Season: It rains in April and May and again November and this can cause some areas of the Mara to be inaccessible due to the sticky ‘black cotton’ mud.

THE SPECIALITIES OF THE MASAI MARA NATIONAL RESERVE.