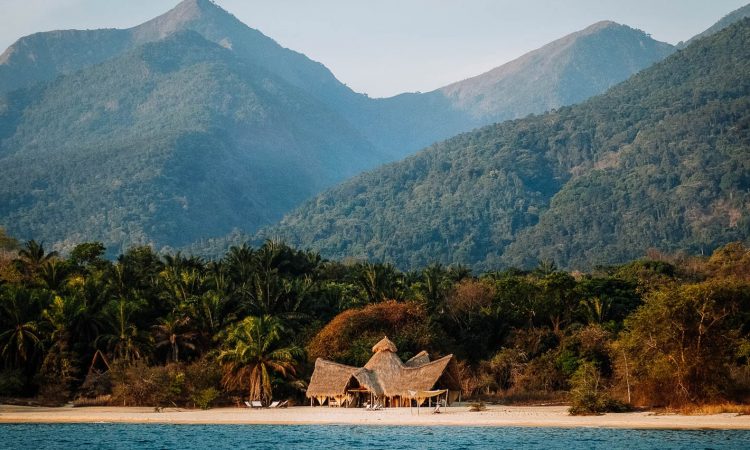 Mahale is a very special place where man can meet his close cousin who shares 98% of the same DNA. This remote and beautiful national park contains at least a thousand chimpanzees, some of whom are so habituated that you can sit amongst them and watch the daily life of a chimp unfold. Unfortunately, when they decide to feed on fruits high in the trees or move off through the branches at high speed, all man’s intelligence and inventions cannot help him follow.

This park is a destination for the traveler with a sense of adventure as there are no roads and the only way to arrive is by air or boat (on Lake Tanganyika) and you must then explore the national park on foot. The Mahale Mountains run from north to west across the middle of the park with the highest peak towering 8,000 feet (approx. 2,462 metres) above sea level.

Mountainous tropical forests hang with vines and tall trees grow on the banks of rivers which tumble into numerous waterfalls. A thousand butterflies rise from the warm wet earth and make Mahale a truly magical place. Together with this there is 39 miles (62km) of pristine lakeshore on a peninsular cutting into Lake Tanganyika – the world’s longest lake and second deepest full of unique chichlid fish.

Seeing chimpanzees in the wild is a great thrill and worth the effort of getting here. Other primates include colobus monkeys, blue monkeys and baboons. Larger mammals found here are buffaloes, elephants, roan and sable antelopes, leopards, lions and warthogs. Birdlife is prolific both in the park and along the lakeshore. Lake Tanganyika contains over 200 types of small shining chichlid fish, many of which are endemic and some of which are allowed to be collected by divers for export to tropical aquariums.

Season
Dry Season: May to October is dry and the best time for forest walks, although the light rains of October and November are also fine. Mid-December to February are also dry.
Rainy Season: the long rains are from March to May.

Facts
Mahale Mountains National Park is situated in the west of Tanzania on the shores of Lake Tanganyika – Tanzania’s western border with Zambia. The park is about 1,000 miles² (1,613 km²). It was gazetted in 1980. A charter flight from Arusha, Dar es Salaam or Kigoma is the best way to reach the park.