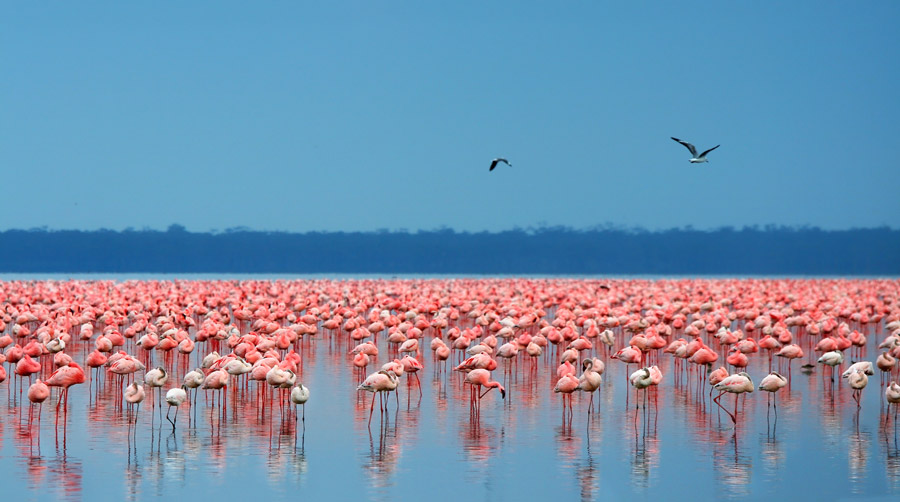 Lake Nakuru National Park is a very shallow strongly alkaline lake 62 km2 in extent. It is set in

a picturesque landscape of surrounding woodland and grassland next to Nakuru town. The landscape includes areas of marsh and grasslands alternating with rocky cliffs and outcrops, stretches of acacia woodland and rocky hillsides covered with a Euphorbia forest on the eastern perimeter. Nakuru provides the visitor with one of Kenya’s best known images. Thousands of flamingo, joined into a massive flock, fringe the shores of this soda lake. A pulsing pink swathe of life that carpets the water, the flamingo are a breathtaking sight.

The lake has become world famous for these birds, who visit the lake to feed on algae that forms on the lake bed. They move back and forth, feeding and occasionally and spectacularly taking to flight, filling the sky over the lake with colour. The lake is extremely variable in size- changing from 5 up to 30 sq kms in area.

Nakuru has more than just flamingos. This is a major National Park and an important sanctuary for Rhino. Both Black and White Rhino are found here, and are often seen resting under acacias by the Lake shore.

The lake catchment is bounded by Menengai crater to the north, the Bahati hills to the north east, the lion hill ranges to the east, eburu crater to the south and the mau escarpment to the west. Three major rivers, the njoro, makalia and enderit drain into the lake, together with treated water from the town’s sewage works and the outflow from several springs along the shore.

Lake Nakuru was first gazetted as a bird sanctuary in 1960 and upgraded to National Park status in 1968. A northern extension was added to the park in 1974 and the lake was designated as a Ramsar site in 1990. The foundation of the parks food chains is the cyanophyte spirulina platensis which can support huge numbers of lesser flamingo.