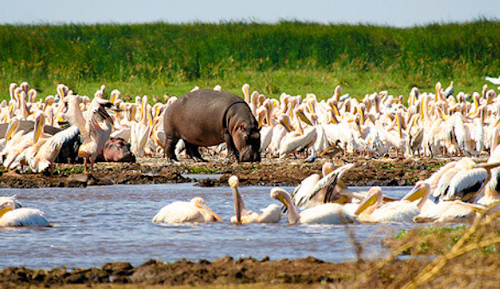 This unusual park lies in the shadow of the Great Rift Valley whose reddish brown escarpment wall looms 1,950 feet high (600 metres) on the eastern horizon. Waterfalls spill over the cliff and hot springs bubble to the surface in the south. Much of the park often appears to be in a heat haze created by the soda lake – Lake Manyara.

The lake attracts considerable birdlife, and its surrounding terrain contains such a rich mosaic of different habitats that it supports a large number of animals. The park is accessed by road via the village of Mto wa Mbu, an eclectic market town where several tribes have converged to form a linguistic mix like nowhere else in Africa.

Such diverse surroundings attract equally diverse species such as monkeys, antelopes, zebras, hippos and crocodiles, buffalo, giraffe and a high density of elephants. The park is particularly known for its tree-climbing lions, who may be seen sleeping off the heat of the day on a branch instead of a shady spot on the ground like most other lions.

Fish-eating birds inhabiting the lake include pelicans, storks, cormorants and Egyptian geese. Flamingoes colour the lake pink as they arrive to feed at the lake during their migration. One unforgettable sight is a giant flock of red billed quelea who gather in their thousands and waft over the water like a giant swarm of insects.

Season
Rainy Season: Short rains are November and December when it gets hot and humid, and the long rains are from March to June. These are the best times for bird watching, waterfalls and canoeing.
Dry Season: typically it is dry in the cooler winter months of July to October, which is the best time to view game.