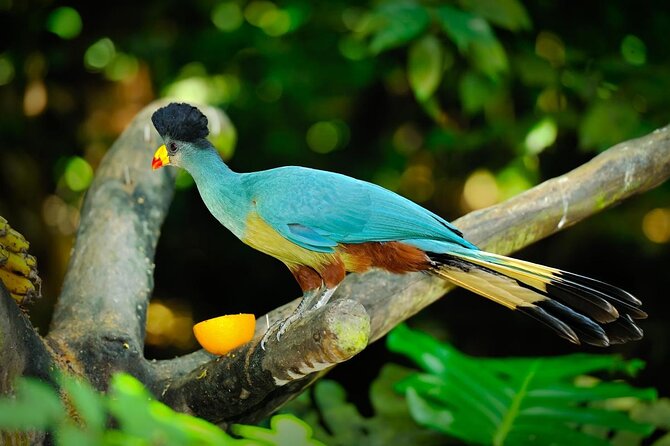 The Kakamega Forest National Reserve covers an area of about 240 km2 and was established to protect the only mid altitude tropical rainforest in Kenya, a remnant and eastern limit of rainforests of Zaire and West Africa. Its West African affinities are unique in Kenya and the forest contains many species found nowhere else in the country.
The forest lies in the Lake Victoria catchment, about 40km north of Kisumu and just east of the Nandi Escarpment that forms the edge of the central highlands.

It was first gazetted as a trust forest in 1933 and two small Nature Reserves, Yala and Isecheno were established within the forest reserve in 1967. In 1986 nearly 4,000ha of the northern portion of the forest together with the adjacent Kisere Forest were gazetted as Kakamega Forest National Reserve. The forest is an important water catchment area with the Isiukhu and Yala rivers flowing through it. The terrain is undulating with often steep sided river valleys. The soils are well-drained, deep, heavily leached clay loams and clays of generally low fertility.

The Kakamega Forest National Reserve climate has an annual rainfall over 2,000mm. Most of this rain falls between April and November with a short dry season from December to March. Rain falls mostly in the afternoons or early evenings and is often accompanied by heavy thunderstorms. Average temperatures remain similar between 15°C and 28°C.