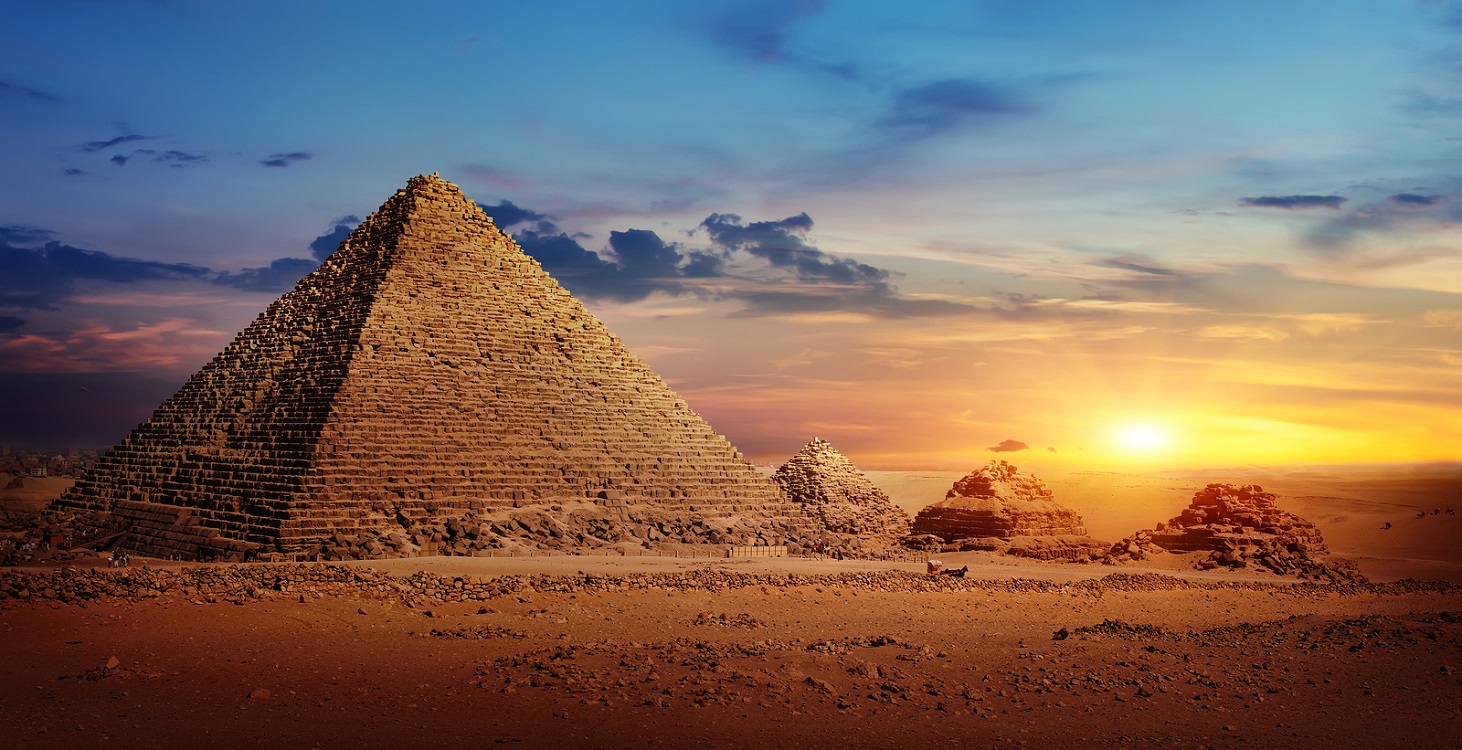 Although the construction of the pyramids was only an episode in the long history of the pharaohs, this period has left us some of the most impressive monuments that can be seen. Besides the three giants of Gizeh, more than 70 pyramids can be counted along the Nile.

Guarded by the familiar lone lion-bodied Sphinx are the three Great Pyramids of Giza. Over 4,000 years ago, the mummified bodies of Kings Cheops, Kefren and Mykerinos were ferried down the Nile to be buried and prepared for the journey to the afterlife within these massive monuments.

The pyramids of Giza are perhaps the only true rival to the Great Sphinx when one thinks of ancient Egypt and its architecture. The Valley of Giza– with its wonderful monuments– is truly a marvel of architectural prowess. The three largest pyramids located in the valley consist of the Great Pyramid of Khufu, the Pyramid of Kafhre and the Pyramid of Menkaura. Each Pyramid is a tomb dedicated to a different king of Egypt.

All three pyramids were built during the Third and Fourth Dynasty; these structures resulted from a monumental effort by the king (and his sons). The Pyramid of Khufu has a base which covers roughly a nine acre area (approximately 392,040 square feet). The Pyramid of Menkaura, unlike the other pyramids, has granite covering one tier of its base. The Pyramid of Khafre had a two-tiered base encased in granite.

Unfortunately, like many of the great kings of the Old Kingdom of Egypt, the Pyramids of Menkaura, Khufu, and Kafhre were not finished by the end of each respective king’s reign. As an example: in the case of Menkaura, the king died before its construction was completed. The monuments of Giza and the entire Giza Valley stand as a marvelous reminder of the skill executed in the creation of the pyramids, and are truly fabulous to see.

The largest, oldest and finest of all three is Cheop’s Pyramid, simply known as the “Great Pyramid”. It was the tallest structure in the world until the end of the nineteenth century (145 meters). But Kefren’s Pyramid, Cheop’s son and successor, makes a bigger first impression. On higher ground with its limestone cap still intact, it looks loftier even though it’s 4 meters shorter.

The smallest of the three, Mykerinos’ Pyramid, makes up for its size with its fine funerary and valley temples.
One of the three Pyramids, the Solar Barque Museum, the Sphinx Complex and the Sphinx Sound and Light Show.

But the Giza necropolis is also the final resting place of the Pharaoh’s family and high officials. Buried inside the mastabas and minor pyramids which dot the plateau are queens and royal courtiers. There are also tombs of the craftsmen and engineers who toiled over these epic edifices.