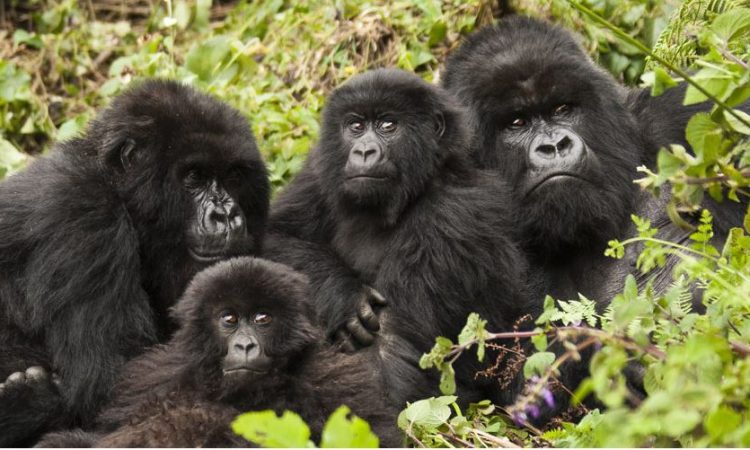 Bwindi’s Impenetrable Forest National Park is true African Jungle. It is so called because of the dense undergrowth, vines and other vegetation make it almost ‘impenetrable’. It’s mysterious and awesome. The lowland rainforest and montane forest vegetation constantly struggles to reach heights that will allow it to receive more light. Huge trees are festooned with creepers and parasitic plants such as mistletoe and orchids.

Giant thickets of bamboo thrive in the humid atmosphere and, where sunlight breaks through, the elegant heliconia, or lobster claw, spreads its colorful petals. Amongst the dense vegetation, the Colobus Monkey jumps from branch to branch, chattering its warning to its fellows hidden by the foliage. Chimpanzees, in families of 20 or 30, make the rounds, searching for fruit and edible plants.

The Bwindi Impenetrable Forest National Park is located in south western Uganda, covering parts of Rukungiri, Kisoro, and Kabale Districts It was gazetted in 1991 with an area of 331 km2. It is situated in a hilly country-side that, together with some remnant lowland forest outside the boundary, constitute an important water catchment area for many rivers, supplying the agricultural land of the surrounding region. As you walk among the shadows of the leafy canopy, this rainforest reveals the smells and sounds of Africa, just as it has been for centuries.

Without doubt, your first impression of the dense jungle will be its almost audible silence. Jungle creatures are very, very shy, but, as you pick your way along the trail, through the dense undergrowth, you’ll realize that the jungle is alive. Thousands of living organisms are discreetly watching and waiting whilst you pass through their protective home and, from time to time, the complete tranquility will be shattered by a darting forest bird or group of chattering monkeys leaping through the stands of ancient trees, disturbing the secretive residents and setting up a chain reaction. Now, the ever-wary jungle comes to colorful and noisy life for a moment, until silence reigns again.

Here, in Bwindi Impenetrable Forest National Park, your guide will take you along river trails with delightful waterfalls, up steep slopes and into forest clearings in search of an enormous array of reserved, exquisite and exciting jungle creatures who live in this deep forest. A forest: which in itself is a complex and remarkable living organism.