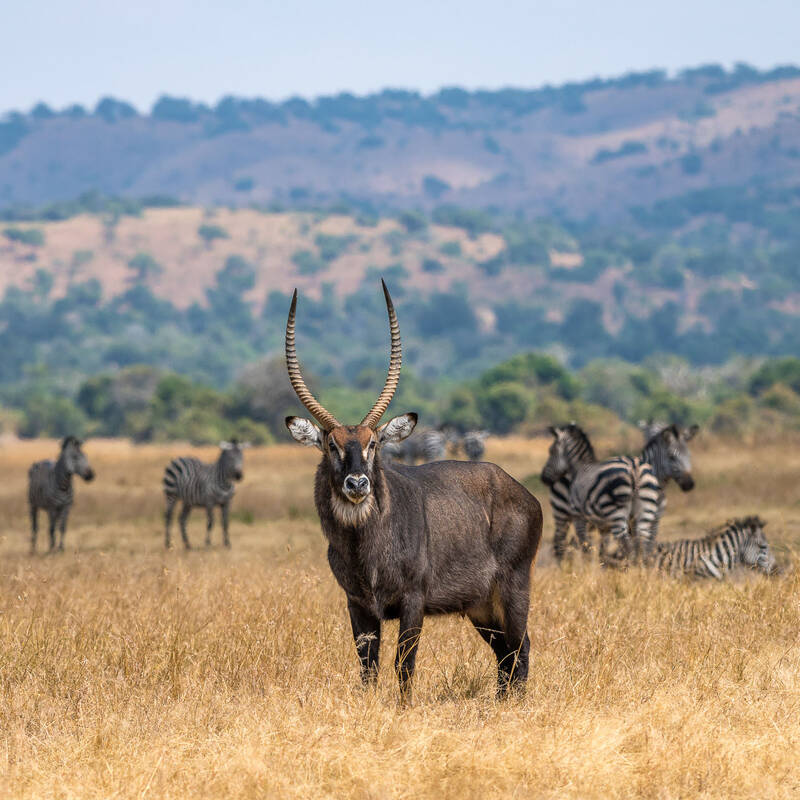 Set at a relatively low altitude on the border with Tanzania, Akagera National Park could scarcely be more different in mood to the breezy cultivated hills that characterise much of Rwanda. Dominated scenically by the labyrinth of swamps and lakes that follow the meandering course of the Akagera River, the most remote source of the Nile, this is archetypal African savannah landscape of tangled acacia woodland interspersed with open grassland.
Akagera is, above all, big game country! Herds of elephant and buffalo emerge from the woodland to drink at the lakes, while lucky visitors might stumble across a leopard, a spotted hyena or even a stray lion. Giraffe and zebra haunt the savannah, and more than a dozen types of antelope inhabit the park, most commonly the handsome chestnut-coated impala, but also the diminutive oribi and secretive bushbuck, as well as the ungainly tsessebe and the world’s largest antelope, the statuesque Cape eland.

Camping alongside the picturesque lakes of Akagera is a truly mystical introduction to the wonders of the African bush. Pods of 50 hippopotami grunt and splutter throughout the day, while outsized crocodiles soak up the sun with their vast jaws menacingly agape. Magically, the air is torn apart by the unforgettable high duetting of a pair of fish eagles, asserting their status as the avian monarchs of Africa’s waterways. Lining the lakes are some of the continent’s densest concentrations of waterbirds, while the connecting marshes are the haunt of the endangered and exquisite papyrus gonolek, and the bizarre shoebill stork – the latter perhaps the most eagerly sought of all African birds.